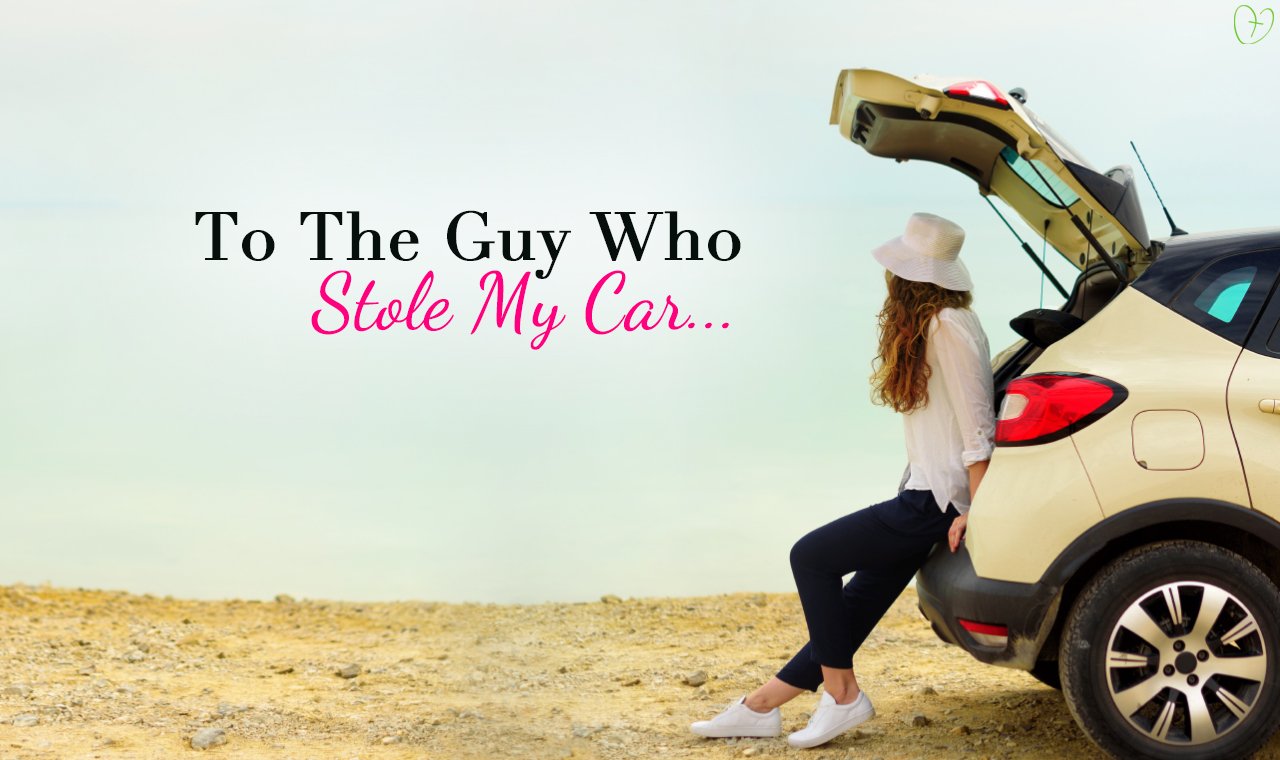 Dear Person Who Stole My Car,

You didn’t just steal my car. Somehow you broke my car to the point that we still don’t know if it is drivable two weeks later. Within the two hours you had the car, somehow the engine failed to work.

It is now eight weeks later, and we still don’t know if the damage to the car is going to be covered by insurance. Yes, it has been a long road.

It has had ripple effects into the lives of my loved ones too. Physical issues, and emotional fear. A lot of stress.

Dear Person Who Stole My Car, What I really want you to know is this… Click To Tweet

I know you are a man, probably a young man who thought this was “fun”, but I remember the woman who was brought before Jesus by Pharisees accusing her of committing adultery. They knew by law she should have been stoned to death, and they asked Jesus what He would say?

They probably hoped He would say that she should get what she deserved.

Who Am I To Cast A Stone?

He said “May the one without sin cast the first stone.”

Jesus was without sin, but they weren’t. He turns to the woman and says, “Has no one condemned you?”

He gave her what she didn’t deserve according to the law. And then He says “Go and sin no more.”

Related Post: An Open Letter To Burnt Out People-Pleasers

Hope for the Future

He doesn’t just not condemn our sin. He wants us to turn away from our sin, and turn to Him. He is full of grace, and He is full of love.

And that is what I want you to know. I am not mad. The people around me may have fear, but my heart breaks that you have to result to a life of sin, opposed to an abundant life filled with everlasting joy. His joy isn’t a temporary high, but a joy and peace that passes understanding.

I just want you to know, that I have been in your shoes. And that I am a sinner. But I am a sinner saved by grace, because the love of my Savior, Jesus is loyal, steadfast, and unfailing.

My Stolen Car Doesn’t Condemn You

And this is what I want you to know, you can turn to Jesus to. You can turn away from the path you have been living, and turn to a loving Father, who’s love is unfailing, so that He can show you His unshakeable grace. You just need to ask Him.

And now I write to you all. This is what my stolen car has taught me about sin.

Sin doesn’t just affect the person committing the sin. Sin has a ripple effect. Kind of like we are still dealing with the ripple effects of sin since it entered the world, like right after the world was created. I bet Adam and Eve never imagined what would have happened next.

I bet the guy who took my car didn’t either, and I forget that my sin has a ripple affect too.

And I long for the day when sin is no more, and the picture of Revelation 21:4 comes to pass.

You know what else I know?

Related Post: 3 Ways We Can Stop Fighting & Know He Is God

I have been deep into Psalm 119 recently, and it is a cry from someone who deeply desires to know God’s word so that He doesn’t sin against Him.

I found it kind of interesting, because honestly, we don’t know His commands, limits, boundaries, statutes, precepts, or desires for our lives unless He teaches us His word.

And when we want to know how to live, we can look at how Jesus lived, because “He was with God in the beginning. Through him all things were made; without him nothing was made that has been made. In him was life, and that life was the light of all mankind. The light shines in the darkness, and the darkness has not overcome it.” John 1: 2-5

We Can’t, But Jesus Did

But truthfully, we are never going to be able to check every box of living up to the law. And thankfully God knows that, and that is why He sent Jesus to die in our place, so that the veil that was between us and Him could be torn. We are set free, so that we share His testimony in our lives.

Do you want to know a few words that just melt my heart when I read them in Scripture?

Because what Jesus says is true. And these are His words written in blood red.

Let us live like we know His grace. Let us love, like we are forgiven. And let us pray for the lost to be found, even if they have done us wrong. And let us celebrate when they have given their lives to the One who paid the ransom for their sin.

4 Things Jesus Said That Change The Way Jessica Views The Person Who Stole Her Car. Click To Tweet

My Stolen Car & You

I hope you can’t relate too well to my stolen car incident, but I do hope you can relate to God’s grace. How has God worked in your heart recently?

If you liked this blog post, you’ll also love our anthology, Faith Talk. Grab a cup of coffee and sit down with these Christian women. They are living with Jesus and invite you to come alongside them for a little Faith Talk. Get your copy from Amazon