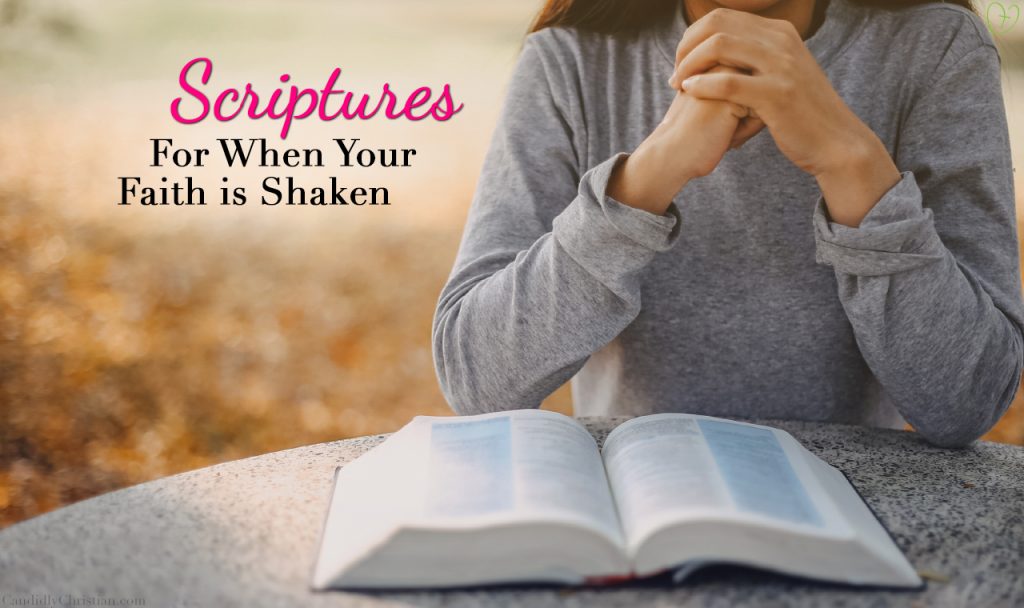 There has always been something quite comforting about a plan. Perhaps that is why over the years I loved bullet journaling, decorating planners and having a to-do list. It felt like there was a certain level of peace attached with knowing what to expect and what to do next. But no matter how pretty the calligraphy was in my bullet journals, how color-coordinated my planner was or how detailed my to-do list was, there was always a chance that something unexpected would come my way.

There were still going to be things in life that were out of my control and things that I could not anticipate that would cause me to feel shaken from the inside out.

And let’s be honest, how I hated that!

It doesn’t matter if you are a new Christian or mature believer; we are all subject to the potential of having our faith shaken from time to time. But let it be known that even when your faith is going through a shaky season, this doesn’t mean that God is any less sovereign or any less loving. Our God has the ability to bless even those going through a season of lukewarm faith, use those who doubt and bring comfort and reassurance to those whose faith is wavering…

Moses and the burning bush, Peter the apostle who denied Jesus three times and Zechariah who did not believe that God could give him a son… just to name a few!

But for today, let’s dive into the shaken faith of John of Baptist.

The Shaken Faith of John the Baptist

The whole gospel of John is one that clearly tells its readers from the beginning of chapter one verse one to the very last full stop that Jesus was the Messiah… the Lamb of God who was to take away the sin of the world. (John 1:29) He knew who Jesus was while he was still in Elizabeth’s womb and leapt when a pregnant Mary approached them (Luke 1:44). John the Baptist witnessed the Spirit of God descend and remain on Jesus with God declaring Christ as His Son. (Matthew 3:16-17).

Related Post: How to Keep the Faith When You Are Shaken

But even John the Baptist who knew through divine revelation and firsthand experience that Jesus was the Messiah, had his faith shaken while he was in prison. While it is not explicitly said why John the Baptist was having second thoughts and doubts about Jesus,  it makes sense that John the Baptist in the midst of his suffering sought reassurance from Jesus that He was indeed the Messiah.

Now when John heard in prison about the deeds of the Christ, he sent word by his disciples and said to him, “Are you the one who is to come, or shall we look for another?” And Jesus answered them, “Go and tell John what you hear and see: the blind receive their sight and the lame walk, lepers are cleansed and the deaf hear, and the dead are raised up, and the poor have good news preached to them. And blessed is the one who is not offended by me.”

While John the Baptist was one of the few who had been able to experience so many confirmations from God Himself that Jesus was indeed the Messiah, he still experienced a season of shaken faith. And yet, Jesus still felt so much love and mercy towards John and his shaken faith because instead of getting angry for his lack of faith, instead, sent word back to John to confirm that He was indeed who He said He was.

What Does This Mean for Us?

For the believer who has been met with the unexpected or thrown into a situation that makes no sense, you can be reassured that God is exactly who He is. His promises have always been fulfilled (Joshua 21:45) and He isn’t a God that will leave you on your own. He is ready to answer our prayers when we cast our anxieties and cares on Him (Philippians 4:5-6) and He promises to carry our burdens.

So the next time you have found yourself in a situation where your faith has been shaken, bring it to the foot of the cross. He doesn’t mind answering your questions and giving your reassurance about your faith in Him. Our Creator is faithful… and will surely lead this lost sheep back home. And best of all? He is always in control… even when we feel so lost and out of control.

Do We Really Trust In God?

Scripture for When Your Faith is Shaken

The Lord is my rock and my fortress and my deliverer, my God, my rock, in whom I take refuge, my shield, and the horn of my salvation, my stronghold.

Do you have a go-to Scripture for when your faith is shaken?

We’d love to hear from you in the comments below.

Michelle is the creator and blogger at Truthfully, Michelle, a blog for the modern Christian girl written from an honest, down-to-earth and biblically grounded POV. The belief at Truthfully, Michelle is that even though culture is influential, we can continue to live a set-apart life from the world around us and remain steadfast in His WTheord. In her spare time you will likely catch her journaling, playing music, having coffee with friends, going for long walks or daydreaming off into a distance. So let’s connect and get to know each other on Pinterest, Instagram and Facebook.