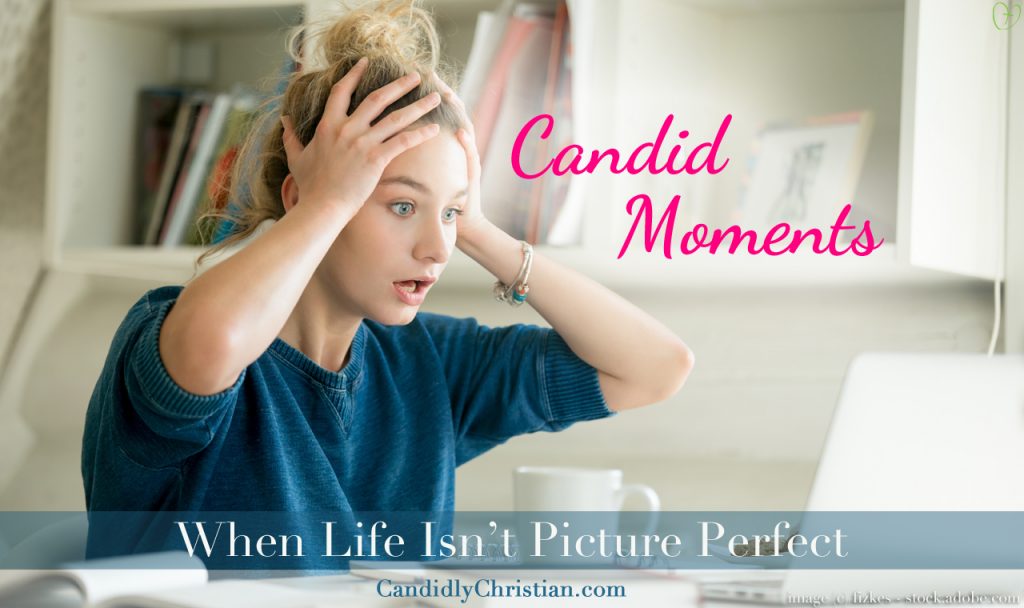 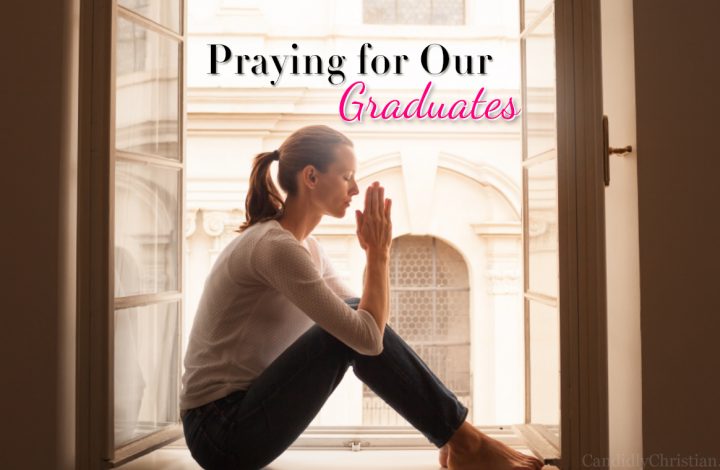 A few underclass band students softly played “Pomp and Circumstance” as I joined the crowd of nervous parents and beaming grandparents filling the bleachers. The high school graduation planning committee spent countless painstaking hours putting together a lovely slideshow for us to enjoy until our young-adult children filed in to grace the matrix of folding chairs blanketed across the gymnasium floor.

END_OF_DOCUMENT_TOKEN_TO_BE_REPLACED 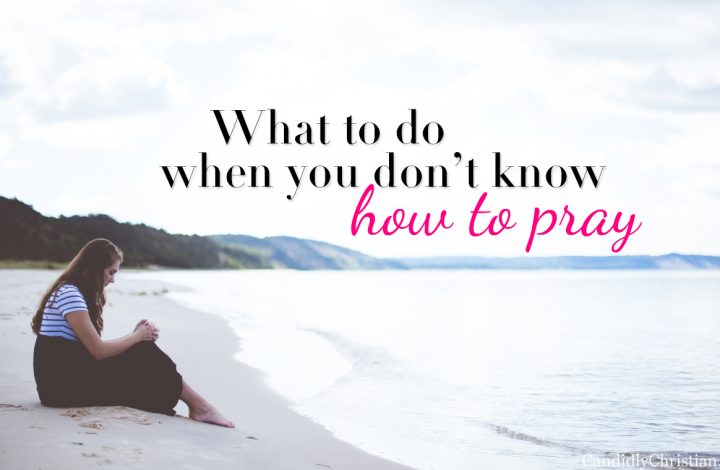 I don’t remember the day of the week or the time of year, but what I do remember is the stark contrast of the moment.

On one hand, there was the clear blue sky, the gentle breeze tag-teaming with the sun to warm my skin to just the perfect temperature. Any other day it might have felt like a little slice of paradise. But this particular day there was a dark, cold feeling in my heart and a heavy weight on my shoulders.

A dear friend had shared that she had a lump in her breast and was going in for a needle biopsy. Another friend was going in the same day because there was a suspected mass in her lung and the doctors needed to investigate further. They were both going in for procedures that day, and our pastor’s wife had texted me and said she felt led to get a few women together to pray with both of them later that morning.

But I didn’t feel like a prayer warrior worthy of that invitation. In fact, I felt overwhelmed, and had absolutely no idea how to pray.

END_OF_DOCUMENT_TOKEN_TO_BE_REPLACED 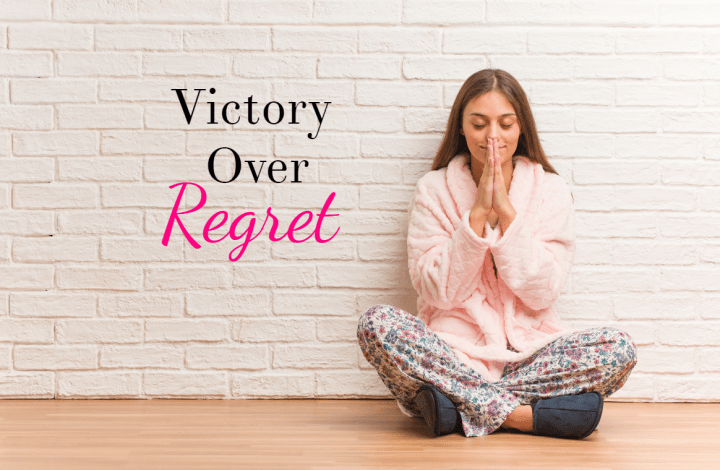 I struggle with getting stuck in my regrets. These regrets could involve things like deep regrets about hurtful things I’ve done or said to people in the past, or very often regrets about not making the most of my time with my kids. In fact, I feel an uneasiness at the beginning of just about every summer as I’m brainstorming ideas for the coming months.

I didn’t always know what it was, but I’ve figured out it’s “pre-regret” because I’m already anticipating being disappointed that I didn’t manage the summer better. I know it sounds crazy, but it’s true. The pattern of regret is always the same: I rehash all the things I should have done, could have done if I’d only (fill-in-the-blank), or would have done under different circumstances (which I also often regret).

I don’t just rehash, though; sometimes I wallow.

END_OF_DOCUMENT_TOKEN_TO_BE_REPLACED 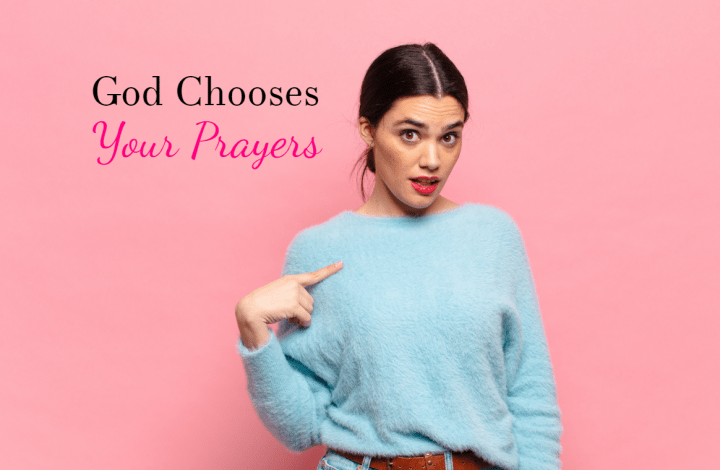 Sometimes I wonder why God has us pray. I’m being honest here. I do pray, and I do completely understand that this is our way of communicating with God and that He wants us to connect with Him on a deep level through prayer and meditation.

But why does God say our prayers make a difference? He’s sovereign, He can do anything, and He can accomplish it all without us having anything to do with it. Why does He tell us to ask for things or to pray for others so that they can get help or outright tell us that our prayers have power?

END_OF_DOCUMENT_TOKEN_TO_BE_REPLACED 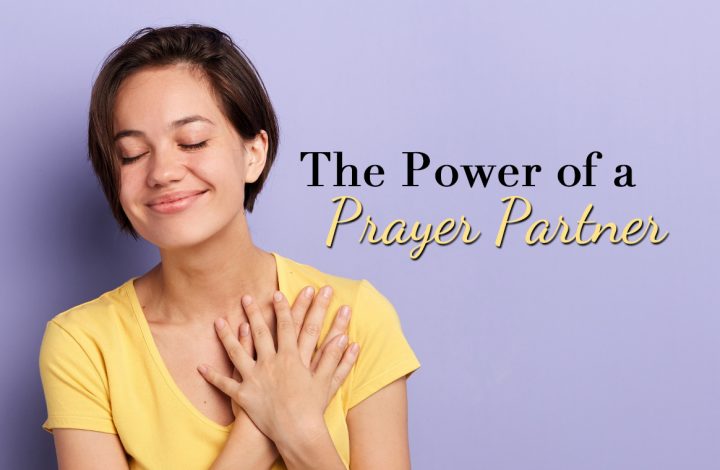 So from now on we regard no one from a worldly point of view, though we once regarded Christ in this way we do so no longer. Therefore if anyone is in Christ, the new creation has come: the old is gone, the new is here!

Have you ever prayed with a stranger and then instantly felt a unique, lasting connection with that person, and wondered why you felt such fondness for someone you spent so little time with?

END_OF_DOCUMENT_TOKEN_TO_BE_REPLACED 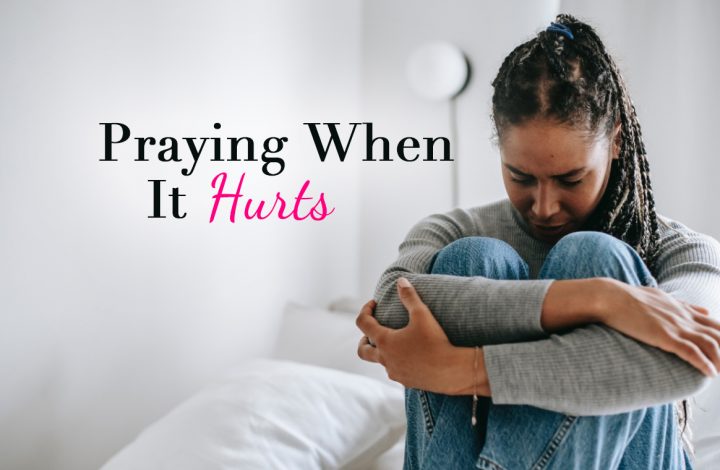 That’s a common phrase for me. Whether it’s in my head or coming out of my mouth, I hate complaining. Yet sometimes it’s the only thought I can process.

Pain is… well, painful. It’s distracting to say the least and can often consume your thoughts.

END_OF_DOCUMENT_TOKEN_TO_BE_REPLACED 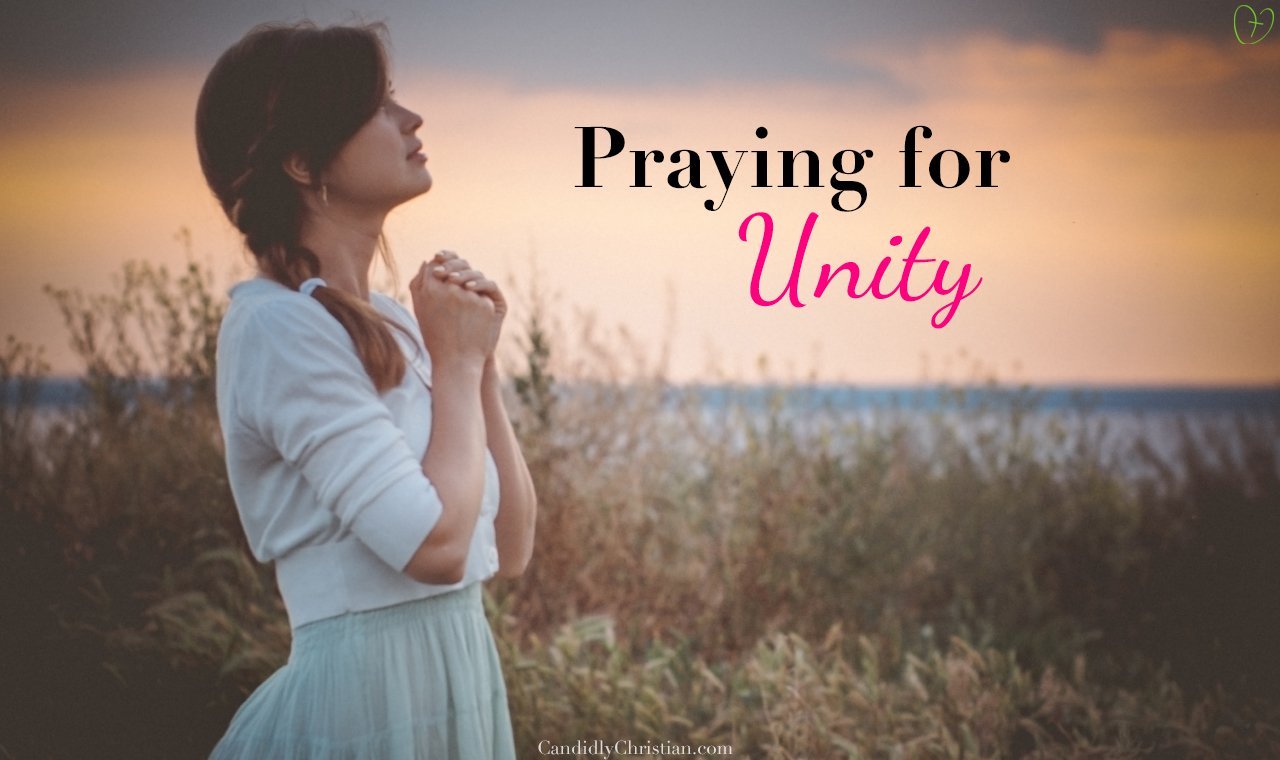 It seems like in the last year there has been more division over issues than any other time I can remember.

Personally, I have struggled with ugly feelings toward people, social media posts, and political issues that I find myself disagreeing with, and I know I’m not alone. God has been working on me in these areas, opening my eyes to my own blind spots and contribution to the problem.

As a peace-seeker, I don’t like outright confrontation, but in my mind and heart there is regularly judgement and conflict. In many ways that can be worse by giving you a false sense of being the “good person” who doesn’t stir up trouble among friends and acquaintances in real life or on social media. Meanwhile, under the surface there is a war raging.

END_OF_DOCUMENT_TOKEN_TO_BE_REPLACED

Do you ever have one of those days where you need to lay it all out with God?

I was filled to the brim with frustration, sadness, anger, anxiety, fear, and a whole other ton of emotions. I was like a dam ready to burst, and anything in my way was about to get destroyed. I threw my hands up in the air to yell at God for my displeasure about the situation. All God said to me was, “I hear you.”

I stopped and said out loud, “You hear me?”

END_OF_DOCUMENT_TOKEN_TO_BE_REPLACED 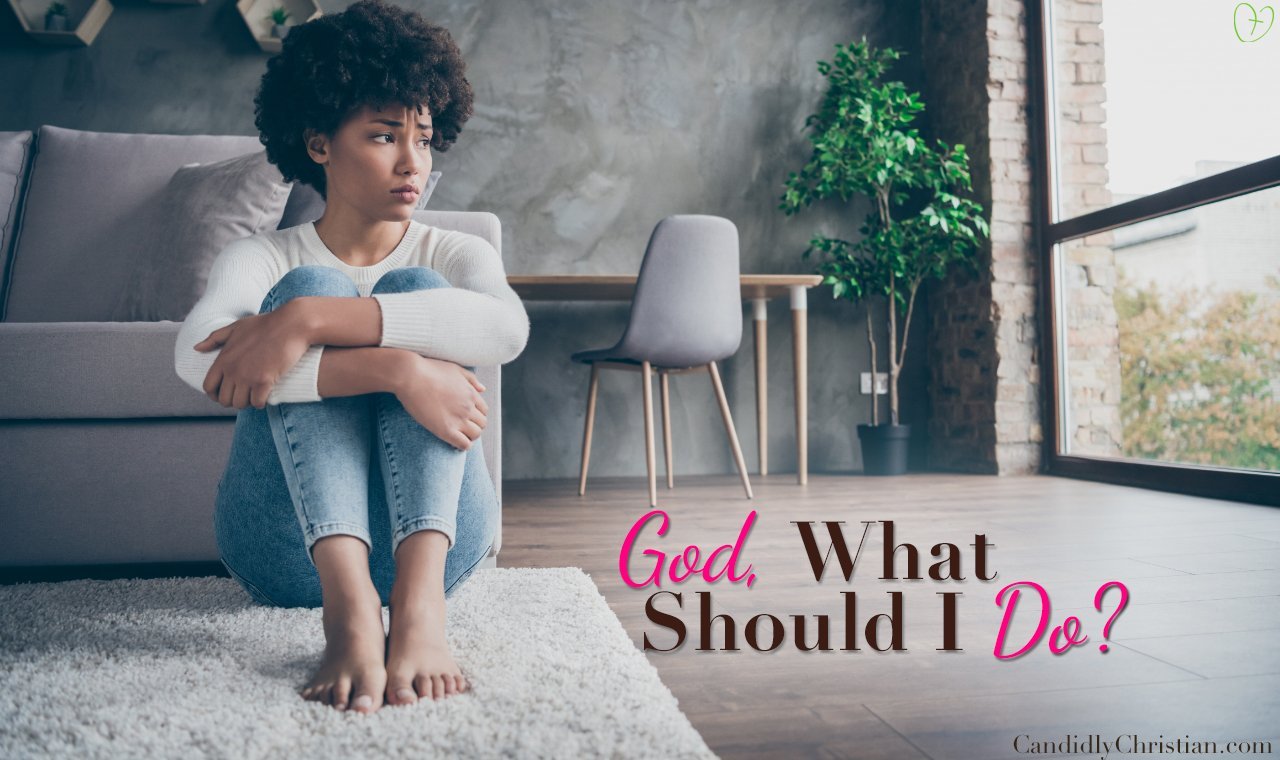 I once made the most useless list ever. It was a pros and cons list about whether I should stay in a long-term, toxic relationship—we weren’t married—or leave it.

I was in a bad situation with no clue how to fix it. All I knew was that I was unhappy, confused, and stuck. I’d prayed about what I should do but God seemed silent.

So, of course, I decided to make a list.

END_OF_DOCUMENT_TOKEN_TO_BE_REPLACED Several years ago, a friend called and asked if I would be an intercessory prayer for her. She was in a rough situation and needed to know she had Christians backing her up in prayer.

She followed up her request with an admonition that intercessory prayer was dangerous. Satan would take it personally, and it wouldn’t be an easy task. In addition to praying for her, I would need to pray for my family and myself. She wasn’t looking for people to add her name to a list, she needed serious prayer.

The weight of what she was asking wasn’t lost on me. And I’ll be really honest, part of me wanted to say no. I already struggled with chronic migraines, I didn’t want them to get worse. However, God had already been preparing me for this question. I saw the foreshadowing of it in my life, and after prayer, I agreed.

Candid confession: I am not a prayer warrior.