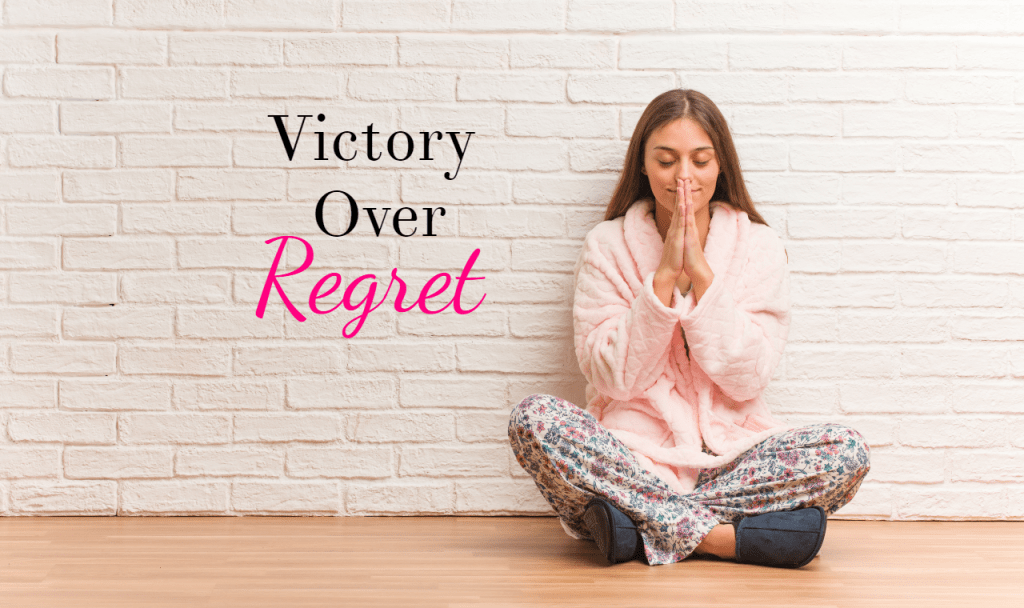 I struggle with getting stuck in my regrets. These regrets could involve things like deep regrets about hurtful things I’ve done or said to people in the past, or very often regrets about not making the most of my time with my kids. In fact, I feel an uneasiness at the beginning of just about every summer as I’m brainstorming ideas for the coming months.

I didn’t always know what it was, but I’ve figured out it’s “pre-regret” because I’m already anticipating being disappointed that I didn’t manage the summer better. I know it sounds crazy, but it’s true. The pattern of regret is always the same: I rehash all the things I should have done, could have done if I’d only (fill-in-the-blank), or would have done under different circumstances (which I also often regret).

I don’t just rehash, though; sometimes I wallow.

And like a pig, there is a degree of comfort (and dare I say even pleasure?!) in the wallowing. I think wallowing in regret can be a form of procrastination. It’s a self-soothing mechanism that allows you to escape taking action and moving forward. It involves a victim mentality that convinces you that the objects of your regret are simply part of who you are and that you’re powerless to escape their lasting effects, or even their recurrence. I’ll take it a step further and say that I think wallowing in regret is a powerful tool the enemy can use to paralyze us, keeping us from growing as Christians and living a life of spiritual abundance.

I think there are two categories of regrets: the things we’ve done or choices we’ve made that we wish we hadn’t, and those things that have been done to us or circumstances that have happened that we’ve had no control over. I’m sure at times there is a little overlap between the two. The one I struggle with most is the first kind, and God has given me a Scripture that has recently become kind of a life verse for me when I sense regret creeping in:

Yet now I am happy, not because you were made sorry, but because your sorrow led you to repentance. For you became sorrowful as God intended and so were not harmed in any way by us. Godly sorrow brings repentance that leads to salvation and leaves no regret, but worldly sorrow brings death. See what this godly sorrow has produced in you: what earnestness, what eagerness to clear yourselves, what indignation, what alarm, what longing, what concern, what readiness to see justice done. At every point you have proved yourselves to be innocent in this matter.

According to this passage, sorrow is the precursor to regret. Sorrow can be a powerful tool God programmed into our makeup to prompt us to know something needs our attention. Sorrow can flag an experience as important. It can sear it into our minds for reflection and action.

In 2 Corinthians 7:9-11, we learn that “Godly sorrow” brings repentance and leads to life and abundance. But when we let sorrow creep in, and our thoughts and emotions remain unchecked, it can give Satan a foothold (which literally means a “place at the table”) to bring despair, paralysis and even death.

A few weeks ago I was interviewing a woman about the importance of praying for your children. As she gave her testimony of how God gave her a passion to pray for her kids, I sensed the enemy pulling up a chair and helping himself to a seat at my table. He started whispering familiar lies that caused regret to rise up in me:

You talk about prayer, but this woman obviously prays more than you. You’re a fraud.

You’re the kind of person who will never prioritize praying for your children; you’re always thinking about it but never actually doing it. That’s never going to change.

Remember those journals you started for your kids years ago you said you’d fill with prayers and eventually give to them? How many times have you written in them? If something happened to you today, your kids would see blank pages and know they weren’t worth your time. Those pages will never be filled because you have no discipline and never will.

Maybe it was the amazing woman of God I was talking with, or maybe it was the Holy Spirit rising in me, but after that interview the word in my mind was “Enough!”

I’d had enough of the regrets, the wallowing, and the defeat. Even though I had more things to do than I had time to do them in, I decided right then and there I was going to pray through our home, room by room. Something I’ve done many times in the past, but not for a very long time.

There’s nothing magical or even overtly spiritual about anointing a doorway with oil, but in my mind taking oil and forming a cross on the door frame above each room I prayed for and doing the same on the pillows where my kids and husband lay their heads at night, served as a symbol to me that I was setting these places and people apart for God. These were sacred rooms, sacred pillows. This home is holy and set apart, and that means there is no place for any spirit other than God’s in or around them.

As I prayed aloud (there was nobody at home other than the dog to hear me), the words started coming out before I even knew what I was saying. I was praying verses and blessings and pictures came to mind for each child and for my husband that led me to pray very specific prayers for each one.

I wept, as I realized how long it had been since I’d done this kind of deep prayer, communing with the Holy Spirit, and allowing Him to guide and direct my prayers for those nearest and dearest to my heart. It was a kind of sorrow, but this kind of sorrow led to repentance and life.

It led to more prayer in the days to come, as I realized I wasn’t stuck, and that the prayer for my home that touched me so deeply took all of ten minutes. Ten minutes. I’ve spent longer than that wallowing or scrolling on social media!

God took the blinders off and helped me to realize that Satan had me in a jail cell with the door closed – only it wasn’t locked. It was an illusion, designed to keep me imprisoned and powerless. Thank God the Holy Spirit (and my dear sister in Christ I interviewed that day) played a part in me realizing I had the power to walk out.

Satan had me in a jail cell with the door closed – only it wasn’t locked. Click To Tweet

The story of victory doesn’t end there. In the last couple of weeks, I have seen God very specifically answering prayers for two of my family members. The prayers I prayed based on the pictures God gave me resulted in powerful movement in their lives. The verse I prayed over one of them came up in a sermon last week, kind of a “God wink” just before I saw God do an amazing work in him that same day.

All of this because I was able to resist the wallowing and move out of regret into action.

I want to know Christ—yes, to know the power of his resurrection and participation in his sufferings, becoming like him in his death, and so, somehow, attaining to the resurrection from the dead. Not that I have already obtained all this, or have already arrived at my goal, but I press on to take hold of that for which Christ Jesus took hold of me. Brothers and sisters, I do not consider myself yet to have taken hold of it. But one thing I do: Forgetting what is behind and straining toward what is ahead, I press on toward the goal to win the prize for which God has called me heavenward in Christ Jesus.

I want to be clear: there have been many times (and there will be again) when I’ve prayed my little heart out, only to be met with silence. Weeks and months might go by without any perceived movement of God. But I believe there is no such thing as unanswered prayer; God always answers. Sometimes it’s a “yes!” Sometimes it’s a “I’m working on it… you may not be able to see it yet, but just be patient, it’s coming!” And other times it’s a resounding “no.”

But it’s the times like these when we do get to see the work and the answers we need to hold on to for those other times when we can’t see the work. Those times are very special, because they involve faith, and there is so much blessing when we believe even when we can’t see:

So, what about you? Do you ever struggle with wallowing in regret? What is one step you can take today to step out of that unlocked prison cell the Enemy would love to keep you in? Let us know in the comments!