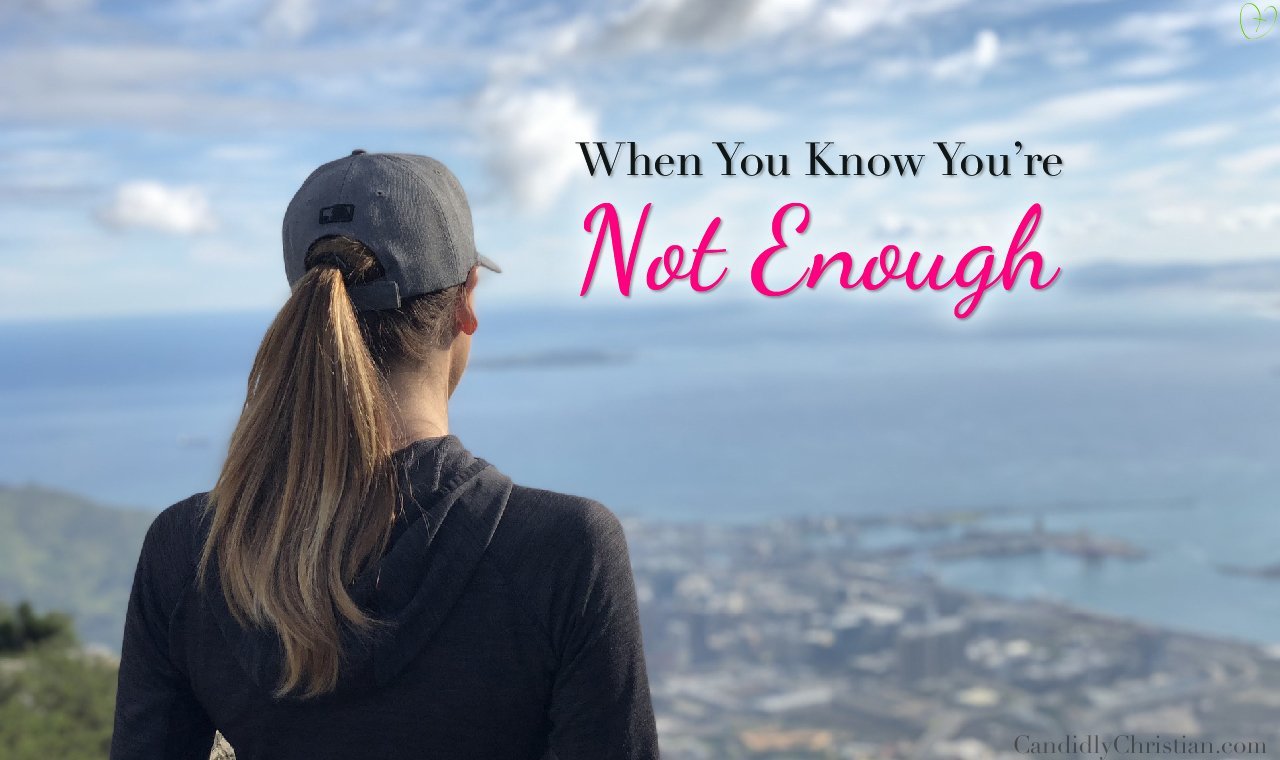 I am not enough.

That is the truth that has been sinking in lately. I sat in the office with only half the amount of paperwork that I was supposed to have with me. My printer had run out of ink that morning (I could have gone to buy ink but then my daughter wouldn’t have had a nap… and that wasn’t an option), I forgot an important document, and I brought my passport because I lost my driver’s license.

That is what the lady in the office said to me. Further confirming that I felt. I was not enough.

That was the same morning I was trying to write an email but had to revise it five times. No matter how hard I tried, the truth kept hitting over and over. There is never enough of me to go around, and there is not enough time in the day to get everything done. I don’t have time for this or that. I am not pretty enough, or well-spoken enough. And sometimes my faith isn’t enough because it is shadowed by my fear.

These truths kept sinking deeper and deeper, until it wasn’t what I felt anymore. Someone said it to me. It is not good enough. A friend. She didn’t mean it like I took it.

But, have you ever felt like a fraud? Because in that moment I did. Who was I to offer ideas? Who was I to ever think that I was enough to ever do anything for God? That He had a good plan for my life? Because there are not good plans for failures.

Yes, now people are seeing I am not enough, and that I am actually the joke that I can think I am.

I could have cried right there. Right on the spot I could have burst into tears, but I was too much in shock.

My “Not Enough” Label Defined Me

I think of how easy it is to get caught up in seeing myself as not enough, and focusing so much on my imperfections and shortcomings can leave me feeling like I am drowning. I have asked God to take these feelings away time and time again, but it is the thorn in my side.

Many of you can probably relate. We want to be good enough, heck even perfect. We never want to make mistakes. The last thing we want is for people to see our weakness, and we don’t want to show up to meetings with missing paperwork because our printer ran out of ink at the last minute.

Turning To The One Who Is Enough

But in this, I find gratitude. Because one thing that I have been learning is the need to take my eyes off of myself and turn them to the One who is more than enough. Jesus.

And above knowing that I am not enough, I need to focus on Him, who is the all-sufficient sacrifice. Who came because He knew we would never measure up. He knew that our acts of sacrifice would never be enough to match up to the perfection of His holiness. But His wrath on our sin, is no match for His love.

There have been so many times that I have been worshiping, and I hear this nagging voice in my head saying Who do you think you are worshiping Jesus? You are unworthy to worship Him. The voice is right. And in these moments, I try to compose myself, before asking Who is my Jesus that HE should be worshiped? The One who is more than enough. Son of God. Wonderful Savior. Blessed Redeemer. God with us. And that is enough for my troubled heart.

4 Things To Do When We Are Not Enough

So, what do I do when I begin to be aware of my shortcomings?

When the crowd of 5000 was fed, it wasn’t because the disciples had enough. Their humanness. Honestly, scripture said in John “Lifting up his eyes, then, and seeing that a large crowd was coming toward him, Jesus said to Philip, ‘Where are we to buy bread, so that these people may eat?’ He said this to test him, for he himself knew what he would do.”

It was a test. Jesus was revealing the limits of the disciple’s faith, and their humanness, so that He could show them that He could provide more than enough with the little that we can offer Him.

As much as I don’t like it, so many times, Jesus reveals our human limits so that He can show His strength, and ability that comes from His Father.

We all know the rest of the story (and if not, that is okay, you can find it in John 6), but when we are overcome by our feeling of not being enough, may we quickly turn to Him, and tell Him Jesus, I know that I am not enough, I know that I can never measure up to Your perfection, but here are my two hands, with the heart to serve You behind them. Use them for Your glory.