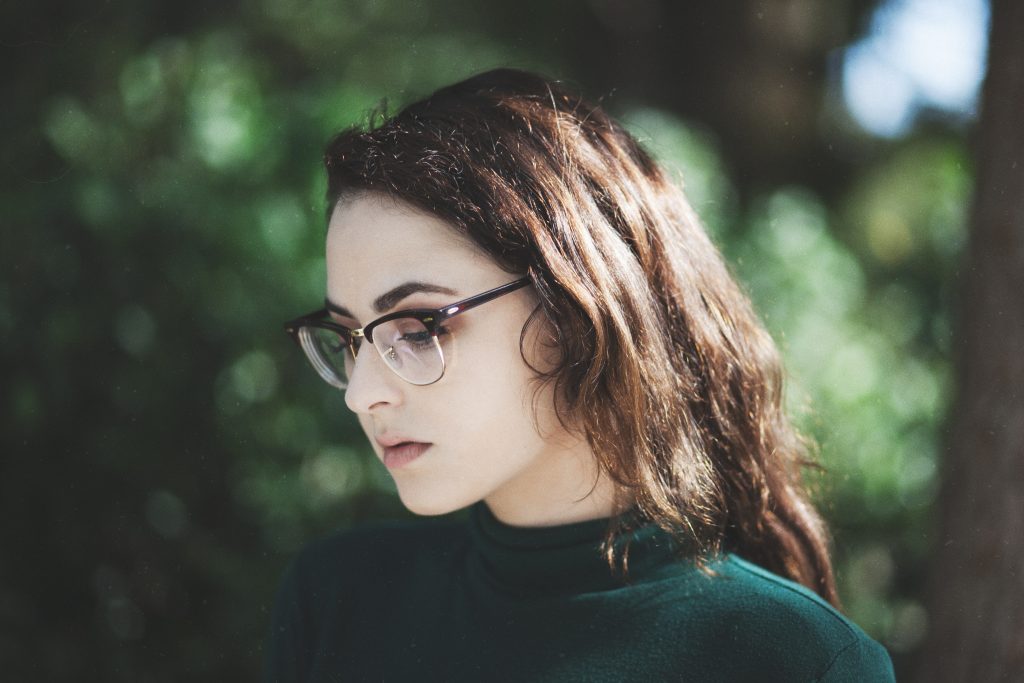 It’s been about 10 years since I had a new pair of glasses. With my prescription, that’s quite a long time to be wearing the same pair.

My old glasses were falling apart. The lenses were scratched, cloudy, the frames had been bent, and they didn’t sit quite square on my face anymore. They were a mess, and it’s a wonder I could see through them at all – but I was used to them.

Finally, a couple weeks ago I got a new eye exam and ordered a brand new pair. I went with a new shape for the eye pieces, and a pretty purple for the frame. No more bland tan or thin gold for me.

After much anticipation, the new pair finally arrived a few days ago. We pulled them out, took off the old glasses, and put on the new.

Everything was distorted. Whenever I turned my head, the room swam. I could only seem to focus when looking through the direct middle of the lenses, and my weaker eye, the left one, immediately reacted to the extra strain. I felt sick to my stomach, physically dizzy and like I couldn’t walk normally.

Everything looked odd and twisted out of shape, not at all like the other times I’d upgraded my glasses.  I had a second of panic, then another several seconds of panic. Maybe the place where I’d ordered them had messed up. Maybe the optometrist had given me the wrong prescription.

But then I remembered I’d never gone that long between a new pair before, and knowing that fact, I chose to just wait a little bit.

Still, throughout that first day I almost switched back to the old ones several times. My eyes were tired, feeling like they were overworked even though it was only halfway through the day.

Thing is, by the end of that day, my eyesight gradually got better. By the end of day one, I could move my head without feeling like the room was swaying in a windstorm.

By the next day, my eyes didn’t tire as fast. The room didn’t spin. I became familiar with the new edges of my frames, and I could tell that my weaker eye had been allowed to skate by for far too long. It was being forced to work along with my stronger eye, and I could tell the difference.

All this made me think…

Sometimes God asks things of us that we think don’t fit. We think this new life God gave us seems distorted. It doesn’t fit in with what we’d expected when we opened this package called Christianity. The new walk with God isn’t all easy. Sometimes the frames are out of focus. We have to get used to a new set of frames, a new boundary.

Sometimes we think God must have messed up. He sent us the wrong order. He didn’t know what He was doing when he wrapped this life up for us and sent it to our doorstep.

I think we often consider this to be more a phenomenon for new Christians, but I think it applies equally to any time a Christian of any age is met with a new challenge, or a new trial.

I need help remembering that a new challenge isn’t going to be comfortable right away. It might feel like a mistake. It might be easier to go along the way we’ve gotten used to things.

[ctt template=”2″ link=”YEkv5″ via=”yes” ]Just because something takes you outside of your comfort zone, doesn’t mean it’s a mistake…[/ctt]

He Makes All Things New

Back to my glasses: a couple nights later I got in the car and started driving. Suddenly I realized I could see. My old glasses had become so scratched that every lamp, every oncoming headlight took on the glare and refracted all over my lenses with these light beams. It was not impossible for me to drive by any means, but it was certainly a concern at times. I had taken to not driving on the freeway at night, and having to adjust my routes. Now suddenly the lamplight and headlights were where they were supposed to be. I could see without the glare obscuring part of the road I was driving on. I could see where the oncoming traffic was sooner.

I looked up, and I could see the stars clearly. Rather than cloudy spots where stars might be, I could see the little star by the moon that I hadn’t seen in a long time.

Now it’s been several days and the room doesn’t spin at all. The glasses are working just fine. The new parameters are settled in. And the bonuses for seeing right are starting to kick in.

I don’t know about you, but I think I give up too soon sometimes. I imagine the worst case scenario and I want to hold back on taking that step ahead of me. I get scared of that adjustment time. I don’t want to leave the stresses I’m used to. It’s not that the old isn’t stressful, it’s just that I’m familiar with them.

How about you? Do you think that sometimes you hold back from a new challenge? How do you see God growing you in that area?