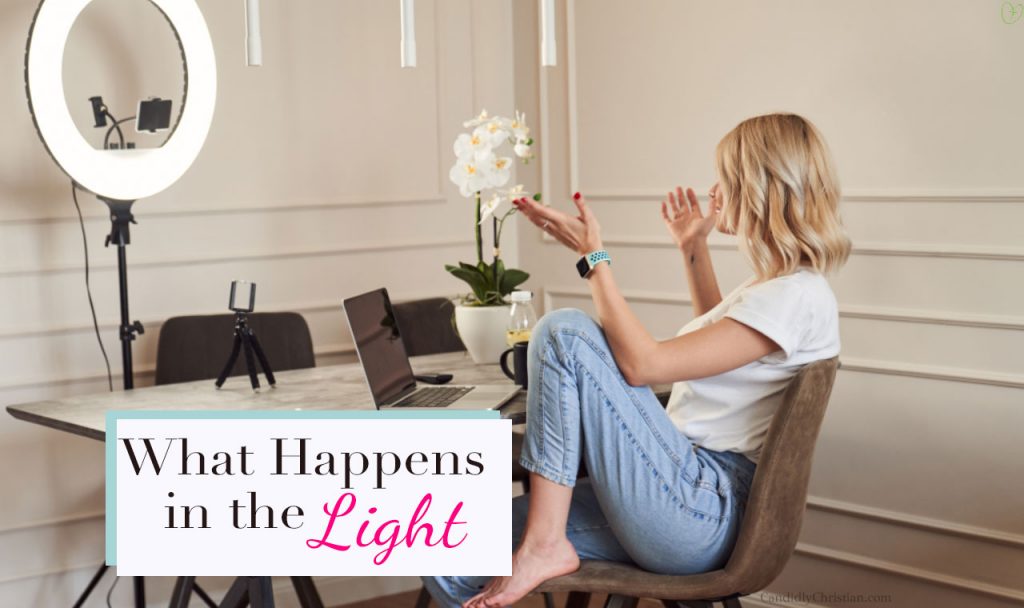 Recently I had to help with a really big project. Most of what I helped with had to do with painting, and cutting and stapling a mesh screen on painted frames that would be hung.

Measurements had to be exact, the mesh had to be put on the frames in a specific way, and the mesh also “shed” a lot. Oh and the painting… that required just as much care and detail.

Simultaneously, we are reading about the 10 commandments and the explanation of them as well. There are so many if-then situations connected to the commands. My head was spinning over all of the conditions based on circumstance.

With trying to get these fixtures right that were really intricate, and reading about these rules that were really intricate… I got really overwhelmed. I felt a level of guilt for all the ways I was falling short with this project, because you better believe that I knew where every single imperfection was, and all the ways that I had tried to hide them.

On top of the intricacies, light was going to be reflected off of it.

Now if I have learned anything about light it is this:  Light has a great way of revealing every imperfection that is usually hidden by the dark. I remember when I used to do color guard and sometimes the gyms/arenas we performed in had those fluorescent lights. They showed every single imperfection of your skin.

Not fun for a teenager.

What Happens in the Light

And honestly, like I was fully aware that my skin imperfections would be all too seen at certain times, was as certain as I was that I (and 100’s of others) would in a few days be staring at other imperfections. And I didn’t think I would be able to focus on anything except every single one of them that I knew were there. I also knew that if you didn’t see them, it was because they were just hidden from the light.

It kind of reminds me of what happened in the garden with Adam and Eve. At this point, there had only been one rule. It was really simple. Don’t eat from the tree of knowledge of good and evil.

Well, we know how that ended. Naked and ashamed. They definitely didn’t want to be seen, or have any light on their condition, as they covered themselves.

We can do the same, stuck in the aftermath of our sin, and imperfections, hiding from God, and hoping that we won’t be exposed by the light. No hope for redemption, coupled with the fear that God will condemn us, just like the rest of the world can sometimes.

The Depth of Sin

Have you ever been there? I go there sometimes. And by “go there”, I mean remembering things I have done. Like my moments that were far from my finest. Things you can’t exactly change. And definitely not wanting to approach a Holy God, with the depth of the sin you are carrying.

I am going to call this being a slave to our sin. Here is the good news: Even when we were still dead in our sin, Jesus died for us. That is how much God loves us. In Him, we have redemption, because of His blood, which according to the riches of God’s grace He lavished on us. We were purchased at a high cost, and God was pleased to do this.

And I love the words riches and lavished here. Both words carry abundance. And I love that God doesn’t do anything small. He doesn’t give out of lack. He gives out of an abundance of love. What He does is going to be noticed, because it will never be able to be labeled as ordinary, normal, or a coincidence.

This reminds me of when Jesus forgives the adulterous woman. She had been caught in the act of adultery. And the law of Moses commanded that someone like her be stoned. I can only imagine how she felt as the teachers of the law and the Pharisees brought her before Jesus. Not only were they condemning her, but they were questioning to trap Jesus so they could have a basis for accusing Him.

All He says in response to them is this “Let any of you who is without sin be the first to throw a stone at her.”

The One who could have thrown the first stone didn’t. One by one they went away until it was only Jesus and the woman. Will He try to find her guilty too? No. He tells her that He doesn’t condemn her, and to go and sin no more.  Jesus didn’t shed light on her sin. She didn’t get what she deserved. She got the opposite. Grace and love. Lavished on her.

Jesus is the Light of the World

Jesus is the light of the world. But His light doesn’t expose our sin, because God made His light shine in the face of Christ. (2 Corinthians 4:6) His light shines in the darkness. Darkness can not overcome it.

What happened to the woman after Jesus told her to go and sin no more? We don’t know. My hope is that she went back to her people, her face radiant because His face shined upon her, and told them all about this man, who knew everything about her, who could have condemned her, but instead lavished her with grace and love. And I hope that she lived her life walking in the light.

Although we don’t know the end of her story, we have the choice of what to do when Jesus, the One without sin, doesn’t cast the first stone. My hope for you is the same hope I have for the woman.

So you may be asking yourself what happened to the fixtures? The light made them really beautiful. Radiant.