Sometimes in my life I’ve felt so loaded down with burdens, so obligated to other people and other agendas that I don’t know how I can bear up under it. I stumble along, until finally I realize I’m carrying other people’s expectations on my back, and they’re affecting me in a terrible way.

This is when God has to take me aside and remind me, again, of that lesson from David’s life.

It’s easy to remember the David and Goliath story. It’s big and bombastic and exciting. But it’s a little easier to forget that lesson in the beginning of the story, when David tries to put on Saul’s armor. I used to wonder why God even put that portion of the story in there.

Until I grew up, and started putting on other people’s armor.

This story in 1 Samuel 17:32-40 is about battle armor, which usually is compared to rules and regulations that other people put on us. But I think it also applies to the burdens that other people might try to get us to carry around – the expectations, the demands on our schedule, the self-judgment that declares we aren’t living up to our own ideals.

All these things are the “armor” we put on every day in order to prepare ourselves for what needs to happen on the battlefield of life.

So here are the things God has to remind me of with that story.

Man’s Armor vs The Armor of God

It takes what’s right for one and tries to put it on everyone else without modification. King Saul was relying on the armor to keep himself safe, and so he figured that same armor would be good to keep David safe. The problem was, each suit of armor is made for the person who owns it, and remember that Saul was an exceptionally tall man. The Bible talks about Saul being head and shoulders above most other men in Israel. His armor wouldn’t fit David. There was no way. Because that armor wasn’t made for David.

Man’s armor is a burden … 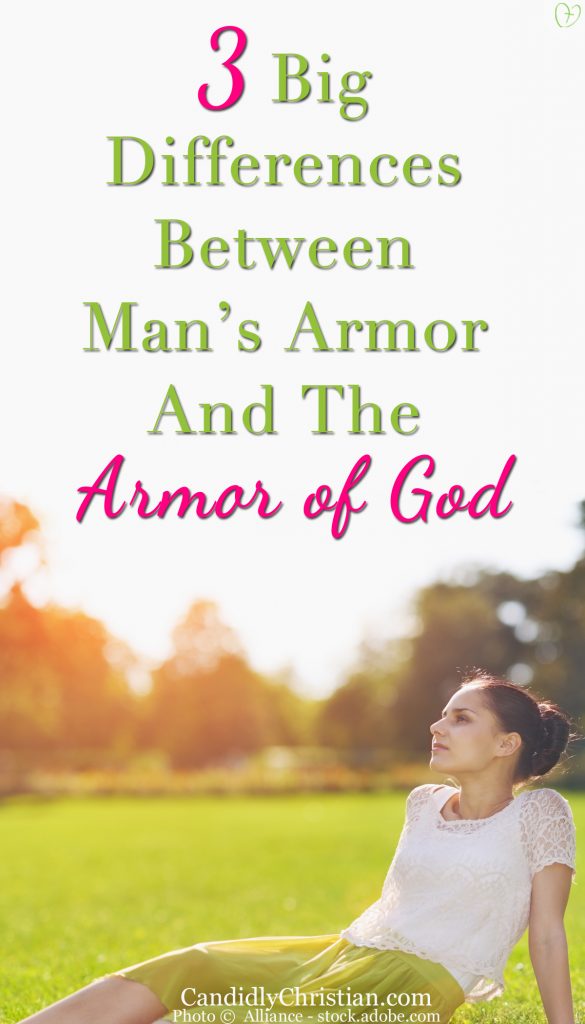 This means that the armor Saul laid on David was a burden rather than a protection. It would have actually hindered David on the battlefield, and wound up getting him killed rather than keeping him any safer.

When we put other people’s burdens on ourselves, we’ll feel weighted down, unable to function, and we can become spiritually wounded. This can lead to us leaving the battlefield altogether.

Saul insisted on David trying his armor. Saul was the king, so Saul had the authority to tell David what to do. For that moment, David was letting another person decide what was expected of him. He was letting someone else direct his ideal, and decide how he should fight his battle.

The Armor of God

It’s when I see myself giving in to these pitfalls that God comes alongside me and reminds me of what His armor looks like. His expectations of us are so much different. It’s like night and day.

It is not a lack of armor, but rather it is armor that fits that person. So the things God expects of me are tailored to me. My strengths, my abilities, my weaknesses. He understands what I’m capable of, even better than I do, and He expects of me accordingly.

God’s armor is not a burden.

It is useful. It is appropriate. It protects and shields without constraining and weighing down. It breathes. It moves with you like a tailored outfit. God’s not in the business of weighing us down. He wants me to succeed, and so the things He wants me to fill my schedule with are things that help, not hinder.

God’s armor is outlined in Scripture.

It is what God commands us, not what man made up. Other people can help us keep that armor in shape, or keep it shined up and fitting us correctly, but other people are not the ones who place that armor on us. Only God can do that.

Whose Armor Are You Wearing?

Are you trying to protect yourself from life in a way that’s weighing you down and making life harder? How have you seen armor at work in your life (good or bad, God’s or man’s)? Let us know in the comments below!