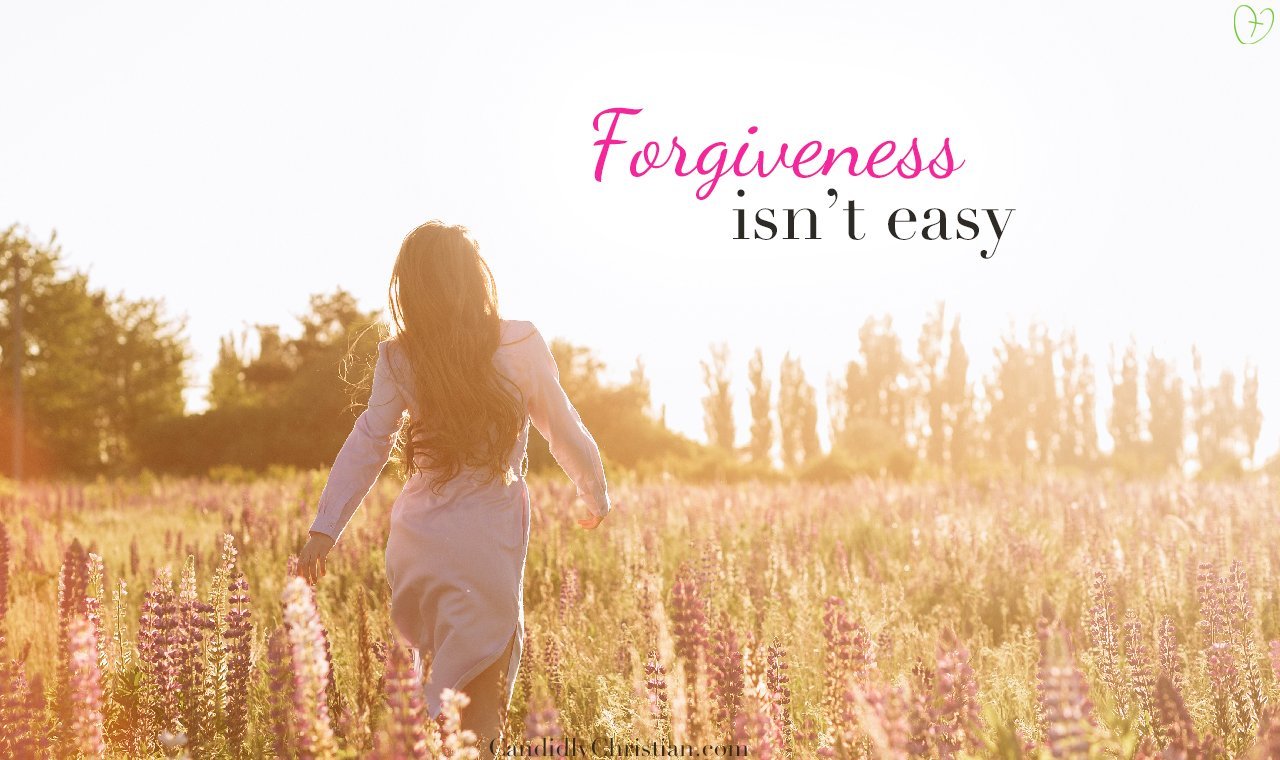 I used to kind of pride myself (maybe that in itself was a hint I was on the wrong track…) on being able to forgive easily, not hold a grudge, and generally move on from an offense pretty quickly. But I started to see patterns emerging. I’d be wounded, “forgive,” and then at some point down the road the same wounds would resurface.

Nothing had been resolved.

Not really, anyway. I’d just slapped a band-aid on it for the sake of avoiding conflict in the moment and keeping the peace.

At first, I thought maybe I was regressing as a person or as a Christian. But as then I realized that God was revealing something to me that needed work. Something that wasn’t new, but new to me. Like layers of an onion being peeled away.

Isn’t that what the Holy Spirit does for us?

The continual work of sanctification, the peeling and pruning and refining that can be painful but is so necessary:

“being confident of this, that he who began a good work in you will carry it on to completion until the day of Christ Jesus.”

4 Things God is Teaching Me About Forgiveness

Here are a few things God is teaching me about forgiveness:

1). Forgiveness always needs to begin with an understanding of the Cross.

This is how God showed his love among us: He sent his one and only Son into the world that we might live through him. This is love: not that we loved God, but that he loved us and sent his Son as an atoning sacrifice for our sins. Dear friends, since God so loved us, we also ought to love one another.

Whenever I struggle with unforgiveness, it’s because I’m coming from a place of woundedness, and that creates a wounded pride. Satan uses that to puff me up and stand in a posture of judgment and superiority over the offending person. The unhealthy thought patterns that are generated usually revolve around me being better than the other person because I’d never do that to them.

But then the Holy Spirit whispers gently, “Look up. Look at Jesus on the cross.” And I’m reminded that whether I’ve caused offense to the person I’m reluctant to forgive doesn’t matter. What matters is that I’ve sinned against God time after time, and Jesus died so that my sin could be hurled away, as far as the east is from the west! How can I look upon Jesus in his suffering and hold any grudge against another child of God, knowing He died for them too? Doing so would mock his sacrifice.

And yet, like the unmerciful servant in Matthew 18:21-35, I far too often forget.

Sometimes forgiveness means reconciling a broken relationship, but sometimes it doesn’t. And sometimes it can’t. A couple of exceptions are toxic relationships and situations when the other party isn’t seeking reconciliation.

3). The path to forgiveness sometimes involves conflict – and that’s okay.

I don’t like conflict. It makes me squirm just thinking about it. So my illusion of being a forgiving person was actually just an uncanny ability to stuff my anger deep down inside where it would fester, and the enemy could get a foothold.

“In your anger do not sin”: Do not let the sun go down while you are still angry, and do not give the devil a foothold.

Maybe the biggest lesson God is teaching me about forgiveness is that I need to be willing to enter into hard conversations letting people know they’ve hurt me in the first place.

There are definitely times when resentment or hurt are totally on my end, when telling someone would just make things weird. This is where it’s always important to self-examine before entering into difficult conversations, or expressing to someone that you need to forgive them for something. We need to ask ourselves whether we’re being overly sensitive, in a habit of being too easily offended, or in my case with my husband it can be that I’m unfairly projecting thoughts or attitudes onto his actions that actually aren’t there.

But there are definitely times when letting someone know that they’ve hurt you is in order. These conversations must be rooted in love, and in my case I know that I really need to guard against being passive aggressive, or wallowing in a “martyr” mentality!

Instead, speaking the truth in love, we will grow to become in every respect the mature body of him who is the head, that is, Christ.

Related Post: How to Forgive Others as Jesus Forgave You

4). Sometimes forgiveness is a long process that takes time and repeated surrender.

Remember what I said about how my woundedness would resurface over and over again? If you think about forgiveness as healing and the offense of someone else as a wound, ignoring the conflict and the pain caused by it is like covering up a wound without cleaning it out, allowing it to fester. (Gross, but accurate!) In this case, you have anger and resentment building up until ultimately it explodes.

But even when you clean the wound by going to God through the act of forgiveness, there are certain types of deep pain that cannot be completely dealt with in one cleansing. The infection may come back from time to time and need another cleansing. Corrie Ten Boom speaks of a time when she had been betrayed by women she had thought were dear friends. She confessed to a friend and pastor that she had forgiven them for what they had done, but at night she would rehash the events in her mind so that she was unable to sleep.

The pastor likened forgiveness to a sexton letting go of a bell on a rope in a church tower. The bell has been rung, so even when the sexton lets go there is a ripple effect of ringing, but it gets increasingly weaker until eventually there is no sound. He said that forgiveness is like letting go of the rope. It begins the process of healing, but that doesn’t mean that there aren’t times when feelings and thoughts come back. This is when we need to go back to God, as many times as it takes to find peace.

I’m still walking this journey of forgiveness, learning more about myself and when and how to forgive. I’m so glad I’m not walking it alone, and that I have Jesus right by my side to direct me and correct me and guide me in the only way that leads to life to the full!

How about you? Do you struggle with forgiveness? Which one of these lessons has been the hardest for you? We’d love to hear from you in the comments!

Come join us in this journey where you’ll meet real people with true stories of forgiveness whose lives were forever changed. You’ll be inspired, encouraged and then changed as you apply what you’re learning to your own life.  It’s time to get Unshackled & Free.