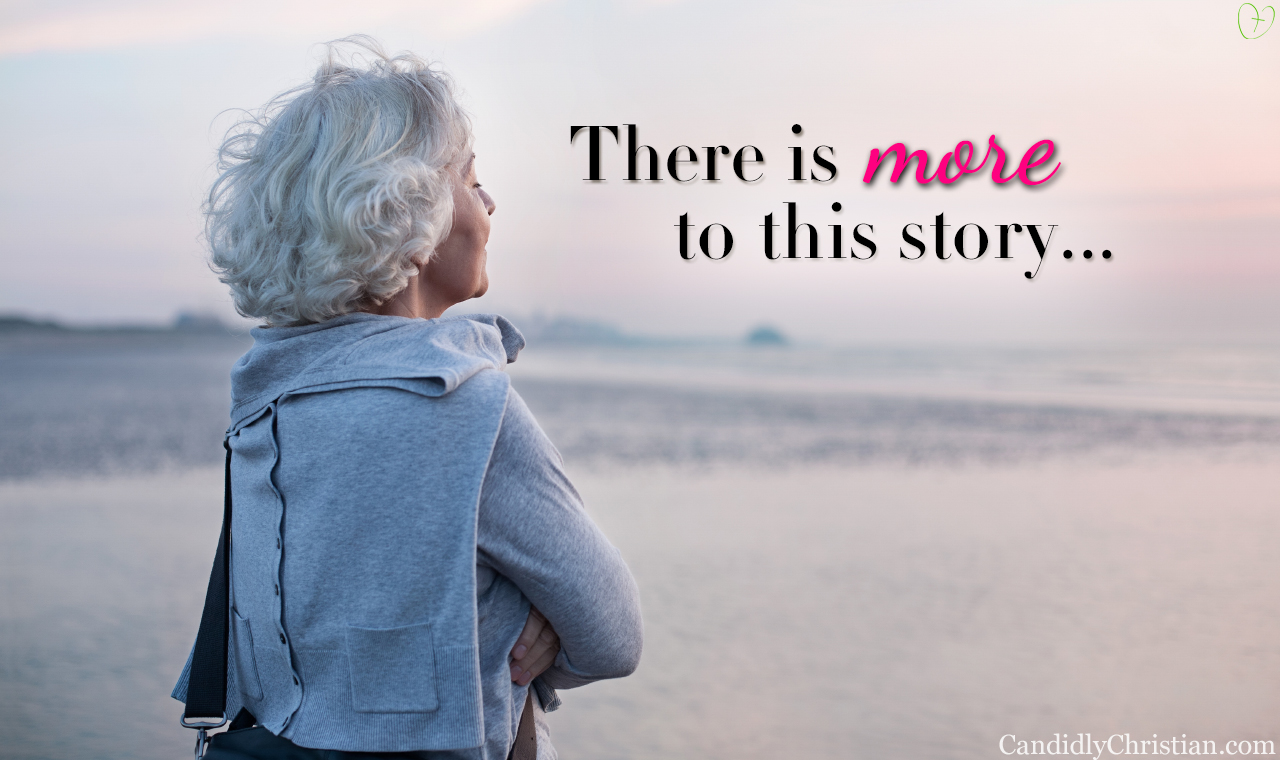 You know who Naomi is, you’ve heard of her in the story of Ruth in the Old Testament.

This story takes place in the time of the Judges, just a couple of generations before King David, a time when there was a great drought in the land of Israel.

She followed her husband to a land she did not know, into a culture she could not accept, and a religion she could not follow. She was alone there in her world. The Bible only tells us of her husband and their two sons. Daughters would have given her companionship, but she seemed to have none.

During their ten years in Midian, she gained two daughters-in-law, Orpah and Ruth. She also lost her husband and both sons within those ten years, gaining only those two daughters. Those are a lot of major losses in a short time span.

She was bitter. She was lonely. She was likely afraid, as well.

So they two went until they came to Bethlehem. And it came to pass, when they were come to Bethlehem, that all the city was moved about them, and they said, Is this Naomi? And she said unto them, Call me not Naomi, call me Mara: for the Almighty hath dealt very bitterly with me. I went out full, and the LORD hath brought me home again empty: why then call ye me Naomi, seeing the LORD hath testified against me, and the Almighty hath afflicted me?

I read these verses and I hear a woman who has given up on her own usefulness. She feels bereft, abandoned, cursed, cast aside. Like she doesn’t have anything to offer the world anymore. It’s all been taken away.

But just look at what we see in the following chapters. God still had a purpose for her.

Ruth is frequently held up as an example of familial love, loyalty, and obedience… and I believe all those are worthy points. But Naomi is an important, pivotal figure here. The story is actually about Naomi as much as it is about Ruth, and in fact, the story follows Naomi’s perspective almost more than Ruth’s.

She is the reason Ruth went to Israel. Without the close relationship that Naomi created with Ruth, Ruth would never have followed her back to Israel.

Once in Israel, Ruth took it upon herself to go out and get food for herself and Naomi in the only way they had as impoverished widows…by gleaning in the surrounding fields. Ruth did this for Naomi’s sake as well as her own. Even in her need, Naomi had a purpose.

Equipping the Next Generation

After this, once Naomi found out that Boaz had shown favor to Ruth because of her loyalty to Naomi, it was her advice that encouraged Ruth to glean specifically in Boaz’s fields. God was using Naomi’s influence to teach Ruth how to live in this country where Ruth had no previous experience.

It was Naomi who taught Ruth the culture of Israel, told her how to approach Boaz, and counseled her on what step to take next. Imagine Ruth trying to navigate all of that by herself. Ruth would likely have never gone to such great lengths to approach Boaz and ask for his kindred redeemer help.

All throughout this book, while Ruth showed loyalty and love for her mother-in-law, Naomi made it her business to equip Ruth for the journey ahead and give her the wise counsel she’d need to navigate a strange land.

Naomi did not tell her she was an adult and needed to figure things out on her own.

She did not tell her to follow her heart or that she’d “just know” what the right decision was. Naomi gave her as much instruction as Ruth reasonably needed.

And for Ruth’s part, she willingly accepted this advice.

Ruth did not tell Naomi to mind her own business. She did not discount Naomi as being too old or out-of-touch.

Naomi could have said that her life was spent, that she had no more purpose. But instead, Naomi continued to pour herself into her daughter-in-law. I truly believe she was not doing this in order to further herself. Naomi had a home to land in, she had a faithful daughter in Ruth who was already showing how willing she was to abandon everything for Naomi’s sake. She had Ruth. Naomi did not need Boaz. In fact, by marrying Ruth off, Naomi risked losing her helper. Ruth would enter into Boaz’s family then, perhaps leaving Naomi behind.

No, Naomi began setting Ruth up for the best possible future for Ruth. She taught her the Israelite way, she trained her in the way she should go. She did what she could to help Ruth’s future, not her own. She didn’t just retire from life, she continued pouring herself into those around her through wise counsel.

So often, studies of the book of Ruth concentrate on the relationship between Ruth and Boaz. I understand that perspective, but besides that, the book of Ruth is a wonderful story of an older woman teaching a younger woman how to live life.

Maybe you feel as if you’ve been set aside, or you’ve lost your purpose in life. Look at Naomi. God had a purpose for her, even after the tragedies she’d suffered, even after her culture would have told her she was done. She had no husband to care for, no children to raise anymore. But God had a unique and important job for her to fill.

Because through Naomi’s influence and training, Ruth became the great-grandmother of King David, and ultimately, in the lineage of Christ Himself. Naomi did not see either of these things come to pass in her own lifetime, and we may not fully understand the purpose behind what God has for us either. But we can take heart from what happened to Naomi and Ruth and remember that God always has a purpose for us, even if we cannot see it.