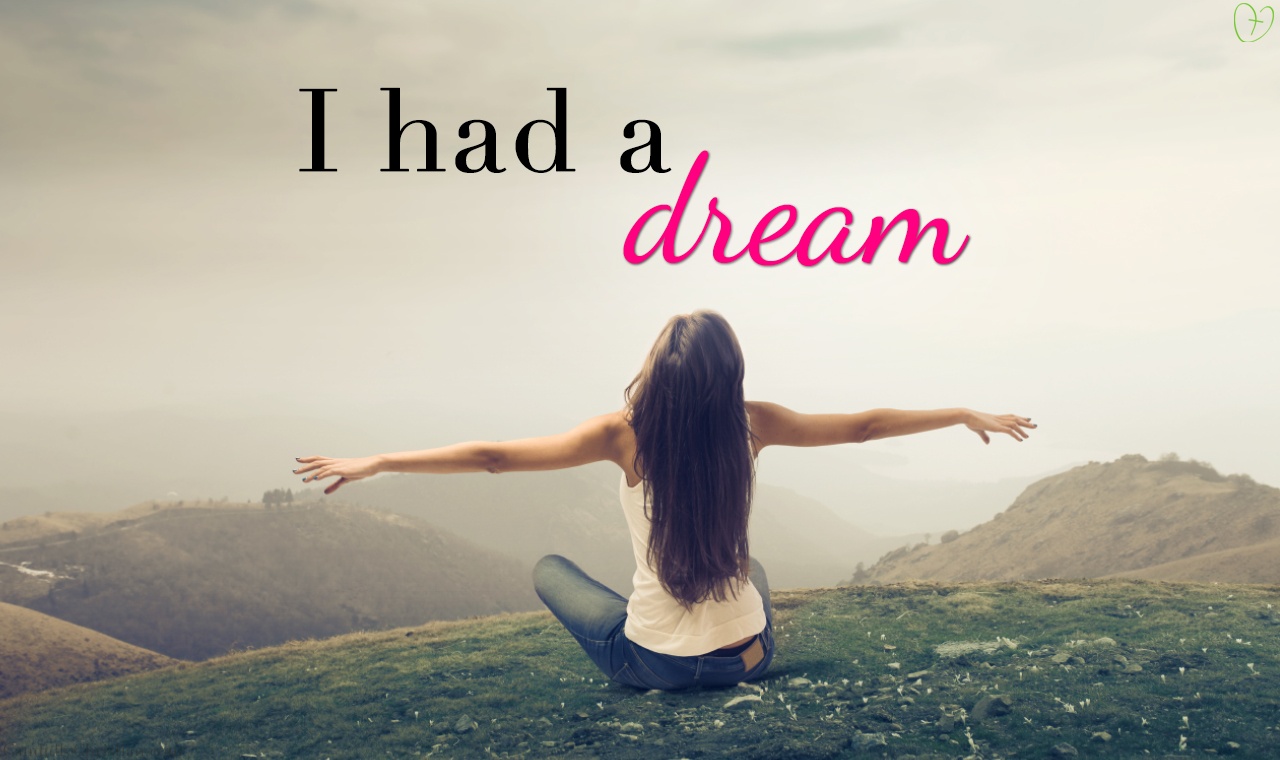 It is my dad’s birthday today. True story. May 10th.

I can’t think of a better thing to write about than the love of a good Father!

I Had a Dream

Dream. Defined by Merriam-Webster “as a series of thoughts, images, or emotions occurring during sleep”, and “a strongly desired goal or purpose.”

The dream was full of light. It made me happy, and in the dream, I remember wondering “what was his dream about?”

Have you ever had a dream like that? It is so good, and so beautiful, and then you are left with a cliffhanger?!?

But honestly, sometimes we will be kept wondering what dreams are before you, what dreams are left unfinished, and what are your good Father’s dreams (or a strongly desired purpose) for you, if He has any at all…

Today I realized that we never have to wonder if our good Father’s dreams for us are good, because we have a book full of His promises for us! We also have a place that He is preparing for us, that really, we can only “dream” about!

She Was Lost… But Now She’s Found

I went on vacation last month with my daughter. We met my parents in Florida at a time share.

Immediately, she was wrapped in his arms, and she just broke down into tears. She finally knew that it was okay to let her guard down, to let go of the fear that she had masked, and just rest in her father’s arms, the place she knows she is safe.

God is Our Father

My friends, I couldn’t stop tears. It was just so beautiful. I definitely wasn’t sobbing, but it was a moment. I turned and said to my friend “that is such a picture of how we can approach our heavenly Father.

Pretending we can do it on our own, and then when we are in His arms we can rest, knowing we are safe.”

Are you scared? Are you walking through life, trying to hold it together? Putting on a brave face, while on the inside, you are dying to crawl up in your Father’s arms, and be loved?

God Has Dreams for Us

That is His invitation to you. That is His dream for you. For the lost to be found. And the dreams you have of the future, the wonders you have on if God could possibly have a good future for you, full of promise, are just waiting for you when you turn to Him.

I always think of the women who bled for 12 years. And back then, when you bled for 12 years, you were basically an outcast for 12 years. You were unclean, and deemed unworthy to be socially accepted in society. It was bad, and her situation was basically hopeless after pursuing healing, but finding nothing but a shattered dream of ever being welcomed back into society.

And she approaches Jesus from behind, to me signifying that her last bit of hope that she possibly had would have been completely destroyed if the Man who could heal her, would actually deny her of the healing she desperately wanted. As it was she didn’t want to be seen because of her condition, but I bet she wouldn’t have been able to handle it if she looked Him in the eyes with expectant hope, and got more disappointment.

What if she didn’t get what she hoped?

The Secret of Hope

But I bet what kept her walking, and carefully pushing through the crowd, trying not to be seen, was the hope that she actually would get what she hoped for!

She touches His robe; her healing was immediate. And Jesus tries to find her. “Who touched my robe?” He said. He persisted in knowing who touched Him.

And finally, there she is falling at His feet, probably in fear that she will again be rejected, even after the healing.

And He said to her “Daughter, your faith has healed you.”

He calls her “daughter”. No rejection, just love. No reciting the law, only publicly declaring her faith.

Do you know what the end of the dream is going to be? God keeping His word, His promise. Us living in heaven. And before that, we have a God who holds our tears in His bottle, and comforts us as a mother comforts their child.

He doesn’t leave us or forsake us, He searches for the lost, and celebrates the found.

If you reach out to Him, He will run to you.

God says His plans for you are good, and He works for the good of those who love Him. He promises the crown of life to those who trust Him, and encourages us to not fear because He is always with us, He goes before us, and strengthens us. He tells us that if we draw near to Him, He will draw near to us.

His promise is true, His love in faithful. He is faithful even when we are faithless. He shines His face upon you, and with Him there is no shame. Only hope.